Home › Personal › Would you put your doggy down?

Would you put your doggy down?

My wife dislikes how much attention I pay the dog, when she is a more worthy and responsive recipient.

To point out the error of my ways, she once put to me one of those statements wives think of; “you love that dog more than you love me”.

An obvious slur on my love for her, I hotly retorted,”Don’t be silly, I love you both the same.”

Fortunately, she did not divorce me on the spot!

We have had doggie pets ever since the children were quite little.  The decision and the choice of pet has always been my wife’s, in spite of her concern for their unhygienic habits and poor table manners.

I don’t seem to be able to resist doggie affection; so sooner or later they become my friends to indulge. When we lived in Papua-New Guinea we had a lovely little puppy that the children named Nancy. I always received a warm welcome when I came home, but she had one fatal flaw. Impatient to greet me, she would chase and bark at my car as I drove in. To my consternation one day I ran over her, an accident she remarkably survived. I thought I had learned my lesson to be more careful, but then it happened again. This time her injuries were more serious, and she failed to pull through. It was my fault and I was more distressed than the children.

Joey the Chihuahua was a stray. He was found wandering unattended around the shopping centre at Golden Grove in Adelaide on successive days in late 1998, and taken to the Vet nearby. When advertisements failed to find an owner, a decision was made to put him down. One of the Vet nurses, a family friend with a kind heart, decided to do a ring around, and contacted my wife. When he came into my office for my approval, he snuggled into my arms. I couldn’t say no.

Many Chihuahuas are yappy dogs; but not our Joey. He rarely barks except when the front door bell rings, and only stops after he has been introduced to the visitors. He has been the perfect travelling companion, happy to spend all day in the car with us, and to sleep there too at night. He has become my shadow, following me now that I am retired, wherever I go. We both sleep more now that we are getting old; his place is on a chair next to me in the study.

Being at least 14 years old, he has been slowing down, but now his heart is failing. His breathing is laboured, and he has fits of coughing to the point of vomiting. He is eating little,  having difficulty moving around, and is on the verge of being incontinent. My wife is suggesting that the time has come to have him put down. She is probably right, but I hate the thought of taking my little friend who trusts me, to the Vet to have his life ended. I’m not sure I can do it.

What do you think? 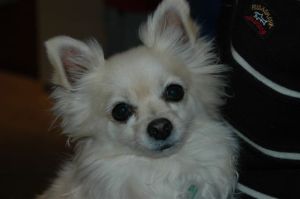