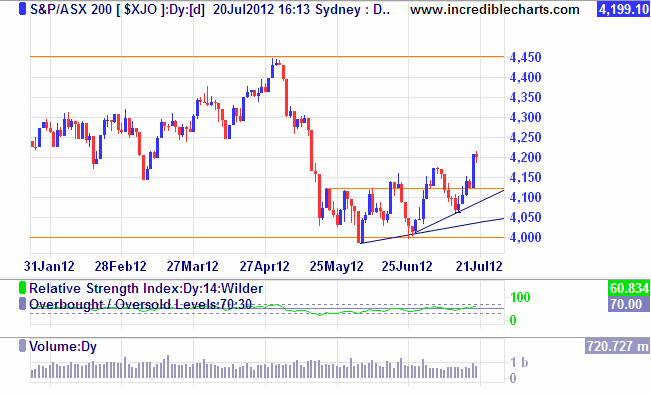 The past week reversed the falls of the previous week creating a new high at 4215.6 today (July 20) before easing back to a close at 4199. This further ‘higher high’ maintains the emerging uptrend from a trading range with support now becoming evident at 4120.

July 19 was a stand-out large range day of 83 points, a 2% rise. In candlestick terminology, the appearance is a ‘white (blue) marubozu’ meaning close cropped, because of the absence of shadow at both the open and close. This is bullish indicating that buying dominated trading throughout the day.

The candlestick appearance for today (July 20) is a so called ‘spinning top’ with shadows at both the open and close longer than the small black (red) real body. This appearance indicates indecision with the market largely balanced between buyers and sellers. It suggests that existing shareholders are holding out for higher prices before taking profits off the table.

One would expect that prices would again weaken next week with support at 4120, but if bullish sentiment were to re-emerge as it did on July 19, a brief pause could be followed by resumption of a strong uptrend.

Like Loading...
‹ I could be a bird…
ASIC to suffer trillion-dollar headache as retirement savings grow | adelaidenow ›