After bordering on insolvency, Bluescope Steel has finally seen a turn-around in its fortunes as a steel manufacturer.

Its own restructuring efforts received a welcome boost when the government revised the anti-dumping rules in its favour Dec 4 2012.

The most recent media release January 14, 2013 announced rationalization changes to the Western Port Plant to cost $17 million, an amount the company anticipates it will recoup within 12 months.

Since the reconstruction the share price has traded in a range between $3.35 and $3.77. 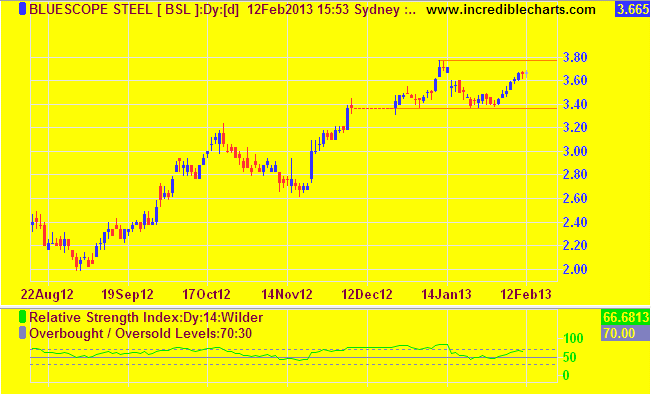 With the improvement in trading conditions it is likely that there will be further upwards re-rating of the share-price .

For this to happen the share-price must first break-out above $3.80 (a possible entry point) before testing the $4 barrier.

Should the share-price contrary to expectation fall, traders would look for the trading range support level to hold at $3.35.

A failure of support would be a signal for a stop-loss sale.

Rebound from intact support on the other hand would be an entry signal for a long position.

A long way to go!

This analysis of the charts of Bluescope Steel is not a recommendation to buy or sell the shares. Do not rely on the opinions expressed in making your own decisions. See full Disclaimer page in the Menu above.