I acknowledge a small shareholding in Woodside Petroleum Limited, and have selected it for  my weekly chart analysis, to aid in my decision making. It is perhaps worth noting that Woodside is a major sponsor for the Fremantle Dockers AFL football team.

A record profit report of $2.98 billion announced Feb 20, 2013 reminded investors that 58-year-old Woodside is still Australia’s premier oil and gas producer, and has infrastructure that would cost $80 billion to replicate today. This net profit result is a stunning 98% increase over the previous year.

It has been the new Pluto project, located  in the Carnarvon Basin 190 km north-west of Karratha, in Western Australia, commencing operation in April 2012, that has resulted in the 31% increase in LNG production, and the 30% gain in sales. Woodside is fortunate to have a 15 year sales agreement with Japanese companies, Kensai Electrical and Tokyo Gas for its LNG production. 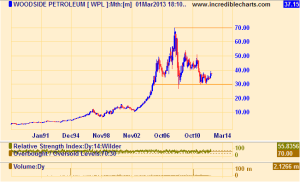 The TA big-picture seen in the monthly chart.

Since then the share-price has ranged between support at $30 and resistance at $54.

In the last two years however the share-price has hovered at the lower end of the range.

A buy and hold strategy would have been extremely profitable between April 2003 and May 2008.

Since then long-term long positions in Woodside would have been mostly disappointing.

From then the price has been confined to a trading range between support at $30 and resistance at $38 on the 38.2% Fibonacci retracement line – a period of about 18 months.

The week ending Feb 22, 2013 the share price briefly penetrated resistance at $38, but fell back when the shares went ex-dividend.

There is a rough correlation between the duration of a trading range, and the extent of trending once there is a break-out.

On this basis one might expect a target share-price of $51 over a medium term.

Since the share-price on the weekly chart has trended higher since July 2012, it would seem to be only the matter of a week or two before the price does break-out above $38.

WPL share-price in an up-trend since Nov 2012

The Short-Term Outlook for Woodside Petroleum

Buy on rumour is the dictum; sell on fact! The market clearly anticipated the favourable report. The later 61.8% retracement of this move coincided with the shares going ex-dividend.

These observations and opinions are those of the writer only and should not be relied upon in decision-making. They are for general information only and do not constitute investment advice. See Disclaimer above.