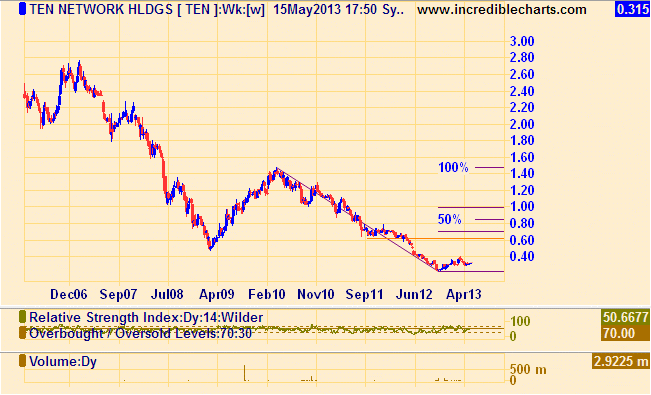 Not a pretty picture!

An earlier post “A turn-around for TEN?”, April 28, commented on the appointment of Gina Rinehart to replace Hamish McLennan as CEO.

This is a chart analysis based on technical considerations only, and is not a suitable source of investment advice.

The picture is an unmitigated disaster for any share-holder unwise enough to stick with the company with the exception a period of just over 12 months from 13 March 2009 until 1 April 2010. In this year, the share-price lifted $1 from a low of 47 c to a high of $1.47.

Currently the shares are just above this low at 30 cents, but still in a down-trend.

Trend change is apparent on the 18 month daily chart

Since then an uptrend has emerged on the daily chart, with three higher highs. and two higher lows followed by an equal low.

This is encouraging for shareholders, but thus far since Gina Rinehart has taken the helm, the share-price has failed to form another higher high. On the other hand a lower low has not formed either; the share-price is confined to a narrow range between 30 and 32 cents.

Implications for the stock

The market would seem to be still pondering the future of Ten Network, and the ability of Gina Rinehart to turn  around its fortunes.

A rise in the share-price above resistance at the last high of 40 cents would confirm an uptrend on the daily chart.

I expect that Gina Rinehart will be a tougher negotiator than her predecessors, suggesting that the share-price is more likely to rise than fall. There is more potential to the upside than the downside, with strong support at 22 cents.

My targets for recovery are:

Ten Network is far from being “out of the woods” financially, but could be worth monitoring for return of market confidence.