Weekly Aussie Market Focus, May 24, 2013, Market baulks at the half way recovery mark.

In contrast to the US which is finding new highs after the global financial collapse (GFC), the Australian share-market as reflected in the ASX 200 (XJO) has failed for the second time to consolidate its recovery above 5000, the half way point in recovery to the previous high at 6852. After twice since 2010 reaching resistance at 5000 only to fall back into a trading range, the XJO in the past three months has finally pushed higher to a peak of 5250.

Why has Australia’s recovery faltered in spite of our undoubted credit-worthiness?

The Australian share-market lacks the scale of the US market, and is vulnerable to global events and concerns, even when our economy appears relatively immune.

Our economy is over-reliant on the resource sector, which had boomed in the years before the GFC with apparently insatiable appetite from China for iron ore and our other resources.

In all probability our market’s failure to match the US recovery reflects lingering concerns over the demand for our commodities and the prices they fetch.

A significant problem in recent  years has been the high Australian dollar on the US dollar. This has reduced the competitiveness of our exports, but dramatically assisted the US to manage their burgeoning $15 trillion trade deficit.

Although the A$ has fallen recently, it is doubtful whether this will resurrect our uncompetitive manufacturing sector. Just this week the Ford Motor Company announced that they will stop car manufacture in Australia in October 2016, with the loss of an estimated 1200 workers.

Just when the XJO had made a new high, and seemed to set to continue its upward trend, we caught another dose of financial contagion from the US. It all stemmed from innocuous reference by the chairman of the US Federal Reserve to a need for the Fed to be flexible in relaxing the level of quantitative easing (QE). Just his reference to a need to slow QE later in the year if the economy permitted was enough to precipitate a global fall in stock-markets at the prospect of tighter financial conditions.

The impact of his comments the last two trading days this week, was more pronounced in Australia than the US. It resulted in the largest one-week fall this year; a fall of 197.3 points or 3.8%. In just two days the market reversed 81% of the previous impulsive move higher, falling from just under 5200 to break support at 5000 and close at 4983.5. 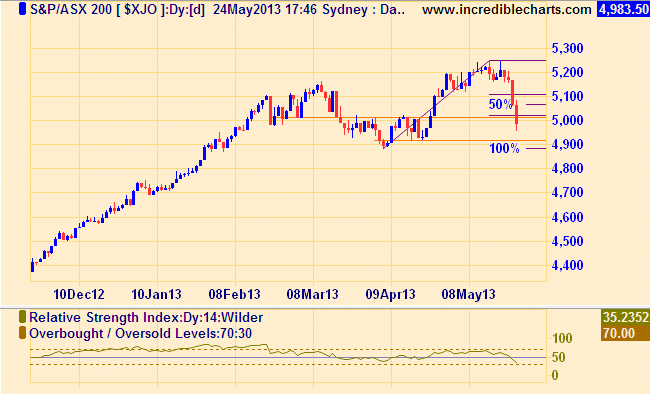 From over-bought to over-sold in one week

Market prospects for the coming week

The XJO rallied just before close from a low of 4954.9 to finish at 4983.5. This intra-day turn-around, together with the RSI finishing at 35, close to over-sold territory, suggests that the market may well continue to rebound in the week to come.

So long as the XJO finds support above 4884, and thus makes a higher low than the last, the present uptrend will remain  intact.

It will be a measure of the bullishness of our market if it rallies promptly with minimal further decline, to regain levels above 5000.