The stock chosen for chart analysis this week is Wide Bay Australia. I had never heard of it until today. This is probably because I live in South Australia, a long way from Australia’s fastest growing state of Queensland where Wide Bay Australia is the state’s largest Building Society.

Regional Queensland is the company’s heartland. It started in the Wide Bay – Burnet region north of the Sunshine Coast which extends from Hervey Bay in the South to Bundaberg, and the Burnet River in the north.

Ron Hancock, who in 1966 founded the Burnett  Permanent Building Society that in 1979 merged with the Maryborough Permanent Society to form the Wide Bay Capricorn Building Society, supervised its growth to the substantial financial company it is today, only retiring in February 2013.

It now also operates in Brisbane, Sydney and Melbourne, and has grown to become Australia’s fourth largest Building Society.

This is a view of the present market standing of Wide Bay Australia and its future prospects, based on technical analysis considerations only. It is my opinion only, and not advice to either buy or sell their shares.

Almost back to square one!

In the 7-8 years before the Global Financial Crisis, Wide Bay Australia enjoyed exceptional appreciation of the share price from a low of about $3 to a high of $13.50 prior to the GFC.

After finding support at about $5.50 in March 2009 the share-price rallied but not to its former high, finding resistance at $11 before entering a prolonged decline.

It appears that there could be a double bottom forming, if the price now rallies.

The medium Term View from the Weekly Chart

This second leg decline of the share price since the GFC found support again at $5.50.

The ensuing rally to $7.20 proved to be a “dead-cat” bounce, as another decline followed. The present appearance suggests a double bottom pattern may be forming,  However this time the price fell through the last support level to $5, at the close today.

The true range of the fall today includes the overnight gap, and is 70 cents or 12.3%. The decisiveness of this fall raises the spectre of a further decline to the next support level at $3.

The Short Term Outlook from the Daily Chart. 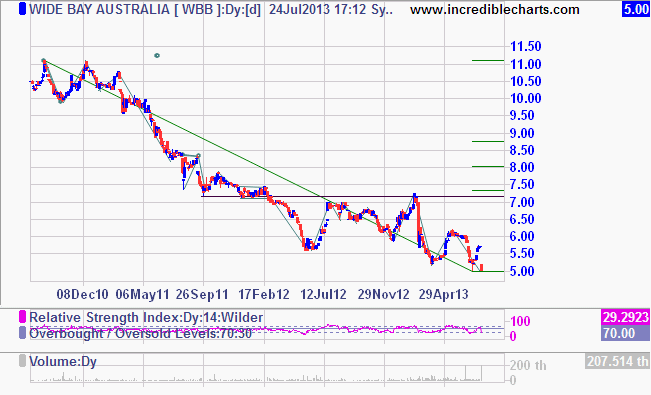 It can be seen that the sequence of lower highs and lower lows remains intact, apart from the single higher high at $7.20 in February 2013.

Gaps lower may at least for a time become a zone of resistance in a falling market.

Investors/traders will tomorrow be watching closely to see if the price rallies after yesterday’s concerning fall, or continues to fall below $5 support. It would be re-assuring if the gap from $5.70 and $5.20 noted above is at least partly closed.

Those traders who are still short will be anxious not to be caught out by a strongly rallying share-price tomorrow. The breaking of support may well have delivered more stock from today’s stop/loss selling to institutions who are  accumulating stock for long positions.

Retail investors would be wise to avoid entering long positions for the present until there is convincing evidence of the share-price bottoming out, and the trend reversing.