ASX.GID is a small cap biotech stock which was listed in Australia on September 7, 2011 at $1.10 raising $80 million. A further private placement of shares earlier this year raised $57.5 million to assist in the funding of a pivotal trial of its use in the USA

This IPO was a spin-off from a US parent founded in 2003 based in Lexington, Massachusetts, a company that had lost $60 million developing a promising product for the management of obesity and Type 2 Diabetes, known as EndoBarrier therapy. Whilst this product has received TGA regulatory approval for use in Australia, and CE Mark approval in Europe, it can only be used at present on an investigational basis in the US.

In June this year GI Dynamics announced  that it had secured French government funding of $1.67 million for a two-year trial at the University Hospital of Lille.

The product is a thin tubular liner that isolates food from the digestive juices of the upper intestine. Although it avoids a surgical incision as required in conventional gastric by-pass surgery, an endoscopic procedure under sedation in hospital is still necessary to pass the liner, and later on to remove it.

Although mostly well tolerated, patients may experience nausea, vomiting and upper abdominal pain. Other risks include infection and bleeding. It is contra-indicated in pregnancy. It is not a permanent treatment, and has to be removed after some months. In that time it is anticipated that lifestyle changes will extend the duration of the improvement.

Technical appraisal of the company performance based on a weekly chart 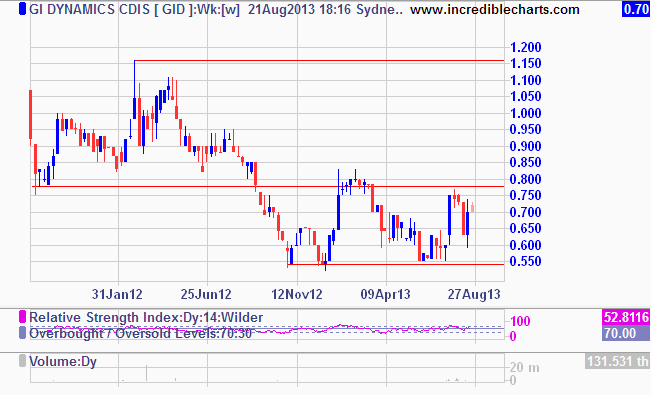 The EndoBarrier therapy is a promising additional medical tool for the management of Type 2 Diabetes and the obesity which often causes it.

It has the appeal of apparent simplicity, but at this stage remains a promising concept not yet suitable for routine use.

A more realistic target if resistance at about 80 cents is broken would be at about 95 cents the mean of the early trading range.

Profitability from sales would seem to be a long way off yet, but the potential market is huge if it lives up to expectations.

A stop/loss position would be at about 50 cents.

Like Loading...
‹ What is the life expectancy of Resonance Health Limited? A Chart Analysis.
Conclusions from the 2013 reporting season – CommSec Securities ›