This weekly chart for Ten Network Holdings over a four year period shows the recent drastic decline in the share-price from the 1st April 2010, when it reached $1.47, to an historic low of 22 cents on the 9th November 2012.

Focus on the Trading Range of Past 12 months

In the last twelve months, the shares have traded between 22 cents and 34 cents apart from a breakout to the upside in March 2013 which faltered.

Following this, low prices have been re-tested, but support has been found higher at 25-27 cents.

The last weekly candle-stick at the time of review (17/11/2013) is a Doji with open and closing prices at 27.5 cents. Although there is a small upper shadow, the lower shadow is long, indicating that buyers have quickly reversed a sell-off during the week.  I regard the appearance as a “dragon-fly” Doji. This is a bullish feature when it comes at the end of an impulsive move lower.

We are accustomed to studying bar charts, or more helpfully charts showing candlestick appearances.  Point and Figure charts are less easy to interpret, but can never-the-less add useful detail, showing move vividly the balance between buyers and sellers.

Point and figure charts disregard the time dimension of prices created from market trading periods. They focus on price movement, regardless of time, in a way to filter out small inconsequential movements (noise).

They illustrate more clearly when there is strong directional movement of price due to the ascendancy of buyer or seller.

They are helpful too in displaying periods of price consolidation in which there is relative agreement between buyers and sellers over price. Such periods of non-trending often provide price stability for institutional accumulation of large share tranches.

The building block of point and figure charts is named a Box. The chartist determines a unit of price change before a new box is drawn. I have chosen for this chart of Ten Network Holdings a box size of 1 cent. This excludes price movements of only half a cent.

The other parameter to be determined is the number of boxes of different direction to be ignored before showing a change in price movement direction. I have selected a three box reversal chart. This is a powerful tool for smoothing out small unimportant movements.

The chart below shows very clearly the strong impulsive sell-off of Ten shares in April- May of 2012, and the ensuing consolidation of the share-price with a recurring low-point of 25-27 cents. There is a presumption of accumulation of shares with buyers taking advantage of any sell-off of shares.

The pattern appears typical at present of a “Fulcrum” reversal pattern. There has been a mid-fulcrum rally which failed.  Yet to be seen is a strong sustained impulsive move higher which will see the share-price exceed the high at 36 cents of the mid-fulcrum rally. 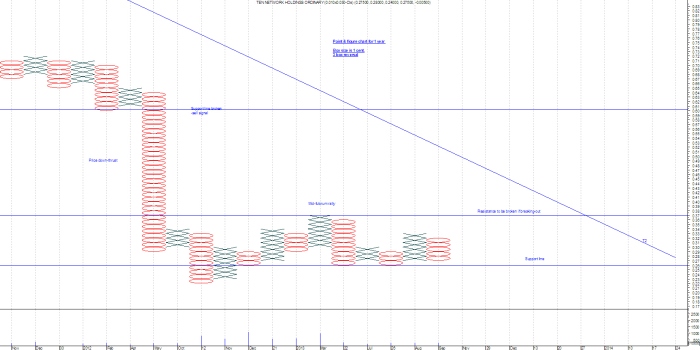 This post takes no note of company fundamentals, or information based on recent management initiatives. Such factors should be taken into account together with one’s own risk profile in making any investment decision to buy or sell Ten Network shares.

Technical analysis suggests that TEN’s share price decline is bottoming out at last, and could soon reverse the trend with a strong movement higher. The entry signal to capture this movement would be a break-out from the trading range.above 36 cents.

For those deciding to go long with Ten, a stop/loss position needs to be set. For me this would be at 24 cents.