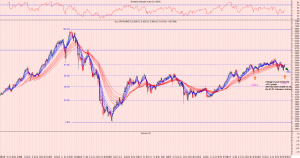 A little more than seven years have passed since the US spread its financial contagion to the rest of the world.

There is an adage that when the US catches a cold, Australia develops pneumonia. How true this proved!

Australia has yet to shake off the effects of the global financial crisis (GFC). Our recovery stalled at about the 61.8% Fibonacci level, as shown on the above weekly chart of the XAO (All Ordinaries).

This was a disappointing result for Aussie investors, since the US S&P 500 index, which had already recovered and was making new highs, continued to forge higher, rewarding those with US shares in their portfolio.

It first exceeded the pre-GFC peak of about 1580  the week of April 12, 2013, and continued to make new highs. The uninterrupted rise through 2014 however has provoked fears of a new correction, triggered by the “bubble-like” prices of some stocks.

Which market is likely to be the more profitable for investors in 2015?

I have plotted the Fibonacci extension levels on the chart of the SPX. At present momentum has carried SPX to a 50% increase above the previous pre-GFC high.

Continuing momentum might well reach a target of 2500 by the end of 2015. However the longer it continues to rise, the more likely a retracement becomes.

Historically, sooner or later major indices do recover, and go on to make new highs.

I would think the XAO might in fact out-perform the SPX in 2015.

?Time for a correction.