Just over 2 years ago I reviewed this company in detail at the invitation of a fellow Ten Bags Full contributor.

I have just recently been invited to reassess the company from my perspective as a retail investor with an interest in technical analysis.

I am not a financial professional and readers should always see advice specific for their needs from their own advisers.

This review makes no pretense to be comprehensive but merely an update on some developments.

This twenty-year old plus West Australian based company, specialises in the development and delivery of medical imaging (MRI based) equipment for measuring the concentration of iron in the liver and the heart (FerriScan), and for diagnosing the extent of fatty disease (HepaFat Scan), and fibrosis of the liver. FerriScan  studies have been carried out in over 30 countries on about 30,000 patients to date.

The medical excellence of its program was officially recognised by the winning of the WA Innovator of the Year Award for 2014.

The Chief Scientific Officer of Resonance Professor Tim St Pierre has won the Western Region Entrepreneur of the Year Award in Technology, for 2015, and will go on to compete for the national award, and in the global award in 2016.

Resonance Health derives more income from the use of its technology in clinical trials than from diagnostic clinical use. The signing of a two year agreement with a pharmaceutical company to provide FerriScan and cardiac T2 services for a phase II multicentre study was important for this reason. 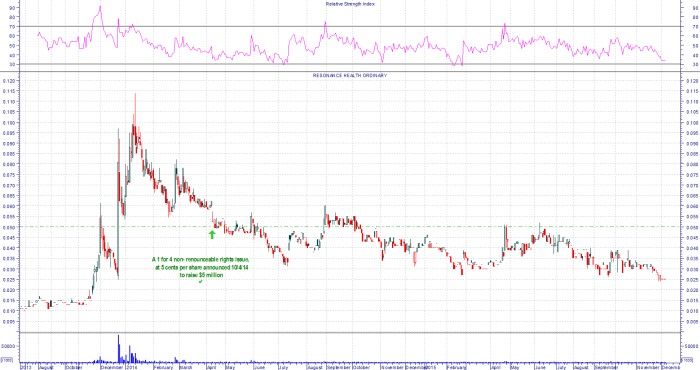 When reviewed two years ago the share-price was static in a range between 1.5 and 2 cents.

The share-price spiked higher without explanation in December 2013 and reached a high of 11.3 cents on the 13th January 2014 before drifting lower.

The intent of the capital raising announced on 10 April 2014 and extended on 30 May 2014, was to issue, 92.7 million shares at 5 cents and raise approximately $4.6 million. Instead 40.2 million shares were issued raising only $2 million.

Since this raising the share-price has continued to fall back to be now about 2.5 cents.

Resonance continues to advance its well-respected medical imaging business, but has not rewarded the loyal share-holders who would have lost money on the capital raising last year.

Like Loading...
‹ Timely Time Frames
The Best Time to Act! A chart review of Slater and Gordon. ›