The Best Time to Act! A chart review of Slater and Gordon.

Disclaimer: I have written this post from the perspective of a retail investor but it does not seek to provide investment advice. It simply looks at the collapse in the share-price of  Slater and Gordon to determine the best time to sell in such situations.

As a retail investor I like to peruse the posts that appear on traders’ websites, the largest of which is Hot Copper with an estimated 250,000 registered contributors. The dialogue is robust to say the least, between supporters (those holding the stocks in question) and detractors; but it is a source of helpful information on almost every stock listed on the ASX.

Some posters seem almost paranoid about being gazumped by other market participants. Those whom they think might have inside knowledge perhaps, by being able to communicate directly with the industry! The big institutions with capital to short sell and influence the market! The operators of smart computer trading tools giving them a time advantage! The professional investors and traders with superior understanding of the market, and access to lower commissions.

I have come to think however that retail investors who manage their own investments, have advantages that can enable them with their limited resources to compete with, and even to exceed the returns of the “big boys”. These include:

The Slater and Gordon Horror Story for Investors.

The chart below tells a story that is an all too common one for investors. Over an eight month period the share-price fell from a high of $8.07 to just 60 cents at the end of November, a fall of 92.6%. There is a distinct risk that this respected law firm, listed on the ASX in November 2007, could go into liquidation.

What is the best way for retail investors to manage such crashes?

The chart below is a daily chart of Slater and Gordon (SGH) for the past 12 months. 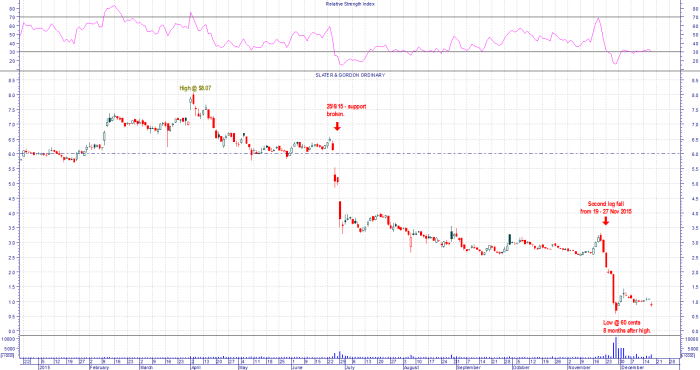 The announcement that precipitated the crash in the share-price was made June 29, 2015. The share price gapped lower at the open, denying holders of the shares the opportunity to sell above the $6 support level.

An immediate seller of the shares that day, or the next, would have been able to sell at $5 or higher. This would easily have been the best course of action, but one most retail investors would have missed.

After three days of free-fall, the share-price entered a gentle down-trend which saw the share-price decline from about $4 to $2.50 over a four and a half month period. This might not have been so worrying to investors after the shock of the initial falls, but it provided investors with more stable prices in which they would have been wise to sell their holdings.

As so often happens, an initial impulsive move is often followed after a trading range breather by a second impulsive move of similar size in the same direction. Over a 7 day period from November the share-price fell from $3.30 through support at $2.50 to just 60 cents, and was accompanied by a spike in trading volume.

Bad news days with dramatic share-price falls often prove to be the best time to sell. For one reason or another retail investors mostly lack the resolve to act so decisively. They may become frozen into inactivity, thinking they have missed their opportunity, and might as well just wait out the downturn. To my way of thinking it is never too late to sell if the price is heading lower. A dollar of loss saved is worth more than a dollar earned as it is a tax deduction, not taxable. A sale returns capital for investment elsewhere.

There are many reasons why investors hang on to their position too long. Mostly it is due to a lack of objectivity:

If in doubt, SELL!