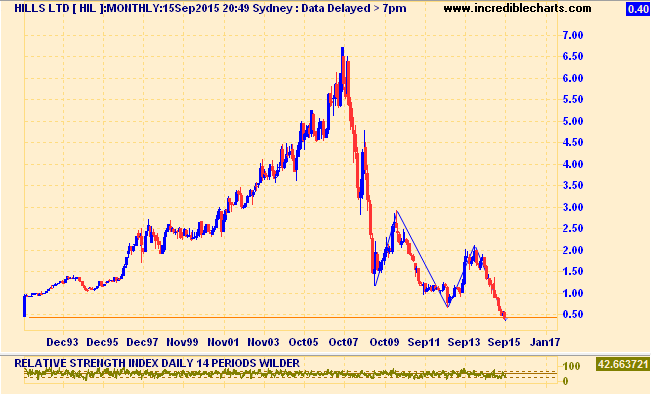 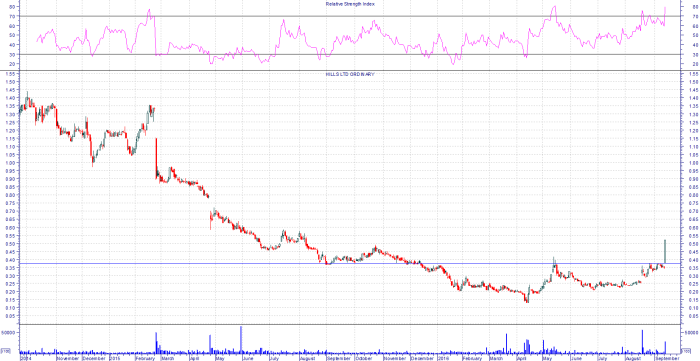 Comments in this post should not be relied on for investment advice. I am not a qualified financial adviser; such opinion should be sought for advice specific to your needs.

Look for action alerts, not fortune-telling.

The two charts above display the changes in the fortunes of the iconic South Australian Industrial company Hills Industries from market darling to market dog, since the onset of the Global Financial Crisis.

Novice chartists may try to read too much into the charts whilst technical skeptics often  expect too much, and become disillusioned with the discipline.   To my thinking it is better to look for, if possible, clear evidence of a change in long-term trend reflecting a turn-around in sentiment.

In retrospect the best time to have sold Hills Industries in the first chart would have been in early 2008 when support at about $6.20 failed to hold. A further alert was given in September 2008 after a lower high was formed in a falling market, at about $4.60.

The second chart is suggestive of a break-out above resistance, and as such, should alert investors to watch for further gains.

Today’s large gains follow the announcement of a proposed merger between Hills Health Solutions with Lincor Limited, a newly incorporated company to be demerged from Hills, and listed on the ASX.

Lincor Limited will be debt free on listing, and Hills shareholders will receive a pro-rata allocation of shares in the new entity.