The financial year 2016/7 had been a good year for investors in Australia’s four major banks until, or more accurately just before, Australia’s Treasurer Scott Morrison delivered the 2017 Budget on Tuesday May 9.

The budget imposed a 0.06% levy on bank liabilities, and with other regulatory measures, it could impact on shareholder returns, and customer patronage, as the banks pass on these new charges. The major banks still enjoy a government guarantee of customer deposits, and these measures will help create a more level playing field for the smaller financial institutions. There will also be an incentive for the banks to be more self-reliant in their funding provisions, rather than being overly-dependent on inter-bank lending. Most analysts believe they will be able to assimilate the new impost, without difficulty.

This post looks at how their share-prices have been impacted two months later, and raises the question of how likely it is that there will be further falls. Shareholders smart enough to take profits before the fall, now have the challenge of deciding if and when it would be best to re-enter.

Below are twelve-month daily candlestick charts of the four banks. In addition to high-lighting trend-lines, and trend- changing patterns, Fibonacci retracement levels have been added to facilitate comparison. For those unfamiliar with this technical tool, the important levels of retracement are 38.2%, 50%, and 61.8% of the previous trend. This coincides with a consistent observation that most retracements peter-out after a fall between one third and two thirds of the last movement. Knowledge of this fact alerts technical analysts to be on the lookout for a possible rebound in the share-price. 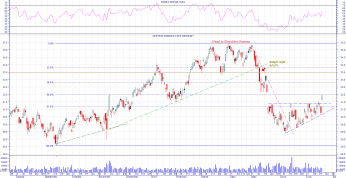 Although there may have been a bounce in the share-price of the major banks, technical analysis (TA) can give no inkling of what may transpire in the coming full-year reporting season, or what the market reaction might be. Volatility is likely and retail shareholders need to be cautious and be guided by their broker’s advice.

Although TA is not predictive of future price direction, it is a tool for monitoring changing sentiment. A key observation to be made in the coming trading days is the point of inflection of the market price, when the present impulsive price movement higher stalls, and is replaced by a corrective move lower, thus forming a new high point. If this is lower than the previous high, it indicates that sellers are willing to sell for less than they did before, and hence the possibility of further falls.