The Parabolic Indicator is one of four to be highly acclaimed, that were devised by mechanical engineer, turned real estate developer, turned technical analyst, J Welles Wilder. The others are:

The Parabolic Indicator is simple and elegant, but probably the least used of them. This is because it is trend-following, with investors likely to be whip-sawed in and out of the market in side-ways trading, with limited profit on each trade.

An 18 month daily chart of BHP has been chosen to illustrate how it can be modified to minimize this, using signals to take profit, and/ or to increase one’s shareholding. This enables the investor to improve returns by scaling in and out of the market with some shares. 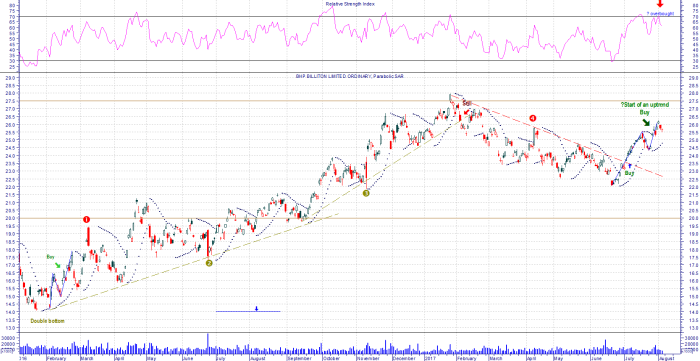 The basic medium-term investment strategy is independent of the parabolic indicator. Trend reversal patterns such as double tops/bottoms, and the head and shoulder configuration, are used to alert the investor to the possibility of a change in trend, and this is confirmed by the formation of two higher or lower highs and lows, before formal entry.

The full position is exited when the extrapolated trend line intersects with the price action, and a reversed trend is identified. These points are identified on the chart above.

When share prices advance and decline. they always do so in the form of surges, and counter surges, termed impulsive and correctional moves. One always leads to the other. The great strength of the parabolic indicator is in showing the continuity of such moves, and warning when a transition is looming. Thus it can provide a helpful trailing stop/loss trace without the need for re-calculation every day.

The parabolic indicator is commonly referred to as a stop and reverse (S&R) indicator on the basis that the trader will remain in the market, just shifting  position from long to short (selling first, buying back later at lower prices).

Whilst it is possible for retail investors to take short positions with the use of derivatives such as CFD’s (Contracts for Difference), this may not be wise for most retail investors. A safer strategy is to just exit, and stay out of the market until there is a buy signal, when it is possible to acquire more shares than were held previously.

The suggestion to limit whip-sawing is based on the observation from the BHP chart above that high true range days (the total price shift over 24 hours, including gapping), coming at the end of an impulsive or correctional move, is often followed by a more sustained move in the opposite direction.

Ingrained into investor psyche is the mentality that you buy when prices rise, and sell when they fall. The parabolic indicator suggests that the best time to buy is after a correctional move lower that has culminated in a particularly sharp fall. Conversely the best time to sell is after a sustained rise culminating in an above normal upward spike in one day.

Like Loading...
‹ Will the mining stocks continue their resurgence?
A tale of two stocks – Brickworks and Blackmores. ›