Home › Chart Review › Will Eden Innovations (EDE) rise Phoenix-like from the ashes of its near annihilation?

Will Eden Innovations (EDE) rise Phoenix-like from the ashes of its near annihilation?

Eden Energy was incorporated in May 2004 as a wholly owned subsidiary of Tasman Resources, and subsequently in 2006, listed on the ASX with ownership of the Irish based energy company Brehon Energy, who was owner in turn of Brehon Cryogenics, Hythane company and Hydrogen China.

The consolidated energy entity focused on new technology initiatives for using coal seam and natural gas, and hydrogen,  whilst also exploring the potential of geothermal energy.

Hythane technology developed by Frank Lynch in the 1980’s uses about 7% hydrogen with natural gas. It is a highly efficient fuel with very low emissions. Eden Energy has continued the research and development of this product including the production and storage of hydrogen, together with extensive trialing of Hythane for over 20 years.

Below is the weekly chart of Eden Energy over a 10 year period. The story for shareholders has been a gloomy one indeed, with the share price collapsing to a low of $0.00604 the week ending 29/06/2012, six years after it was listed. The share-price continued to languish over the next three years and in the week of 1/05/2015 it was still touching a low of only 0.8 cents per share. 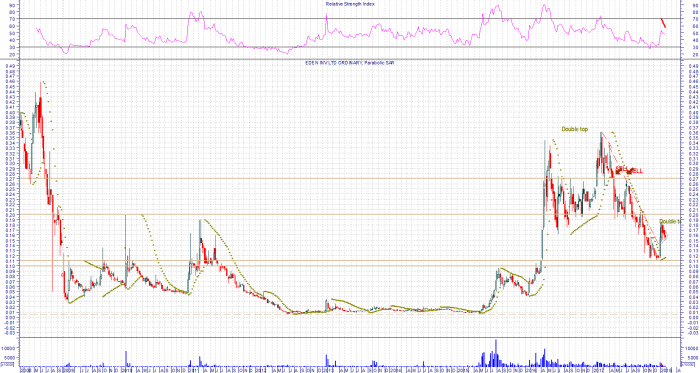 The long-living Phoenix of Greek mythology is said to have self-immolated before rising from its own ashes to new-life in response to the energy of the sun.

The unlikely revival of interest in Eden Energy springs not from Energy technology but from brilliant new technological innovations, based on the strength and resilience of a new carbon additive product, Edencrete, to cement. It is now being successfully used in 11 states in the USA. As concrete buildings and infrastructures age and lose tensile strength, demand is likely to grow.

Despite the initial flurry of interest in the company, now known as Eden Innovations, the share-price has been in a downtrend over the last year, as seen on the daily chart below, until the past month. The share-price has jumped from 11 to a double top at 18.5 cents. 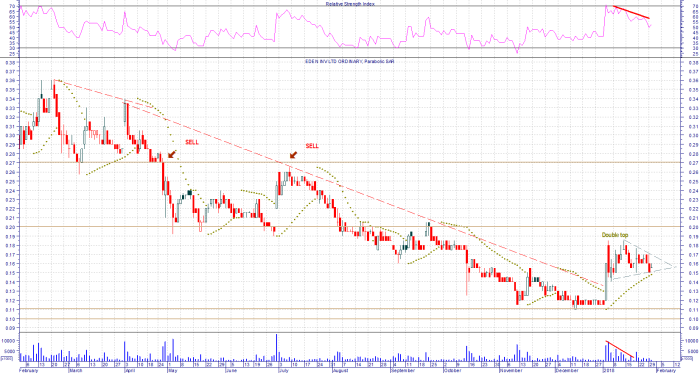 The most recent price action is a triangular consolidation pattern from which the direction of break-out can not be predicted.

Eden Innovations at 12 January 2018 had a market cap of A$252 million. It had cash on hand of approximately A$2.1 million, and debt of US$ 0.89 million. A capital raising in the near future is possible considering the limited cash reserve.

The largest shareholder with 513,198,298 votes and 39.138% voting power and still increasing its holding, is Noble Energy, an independent oil and gas exploration and production company based in Houston, Texas.

I am qualified only as a technical analyst, and stress that readers interested in Eden should always seek professional advice tailored to their financial situation before taking any position in this speculative share. I acknowledge having a small position in the company myself.

Like Loading...
‹ The Head and Shoulders Pattern. A chart review of Beach Energy (BPT)
Who wants to win or lose on Health-Care Stocks? The Sirtex (SRX) saga draws to an end. ›