The two charts below are 1) a twelve month daily chart of AACo from Metastock using ASX data from Paritech, and 2) a two and a half year weekly chart from Incredible Charts.

AAC has been a profitable investment for me on four occasions in the past, but not so recently. I took positions in Australian Agricultural, Australia’s largest cattle company, October/ Nov 2017 after a retracement that seemed at the time to have found support at $1.45. I did catch a rebound that took the share-price to $1.63, but it was a counter-trend impulsive move, and I failed to exit until two months later, after my stop/loss position was hit.

It may however now be opportune to re visit AAC’s position in the wake of the FY 2018 profit result released on 23 May 2018. 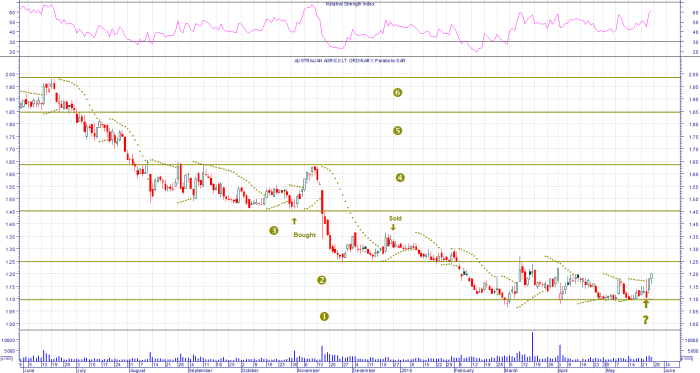 The share price has been on a down-ward trajectory for the whole of the past year and this announcement clarifies its financial position. In the two days of trading since then, buyers have bid the share-price up from long-term support at $1.10 to an end of week closing price of $1.20.

Two and a half year weekly chart of AAC 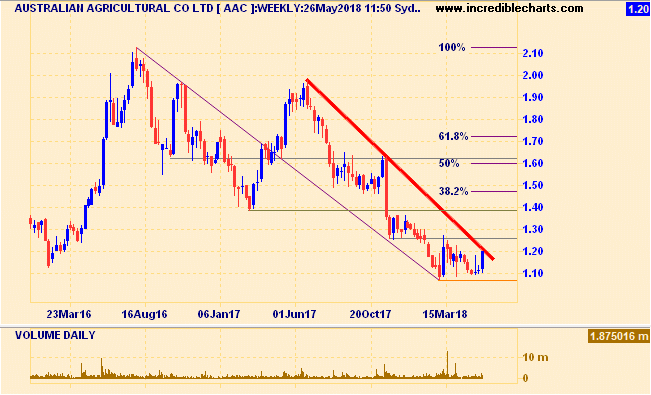 The weekly chart shows this price action has touched the trendline of the last twelve months, and raises the possibility of further gains. The Fibonacci retracement levels included on this chart suggest that if the trendline is penetrated a target of $1.48, corresponding to the 38.2% Fibonacci level, might be realizable. Breaking of $1.10 support would be stop/loss signal.

Readers are advised to seek the advice of their stock-broker for further information as to the prospects of AAC for the coming year.

Like Loading...
‹ Is Superannuation the tax-effective vehicle to save for our retirement we think it is?
Capital gain for Admedus! Capital loss for shareholders participating in the SPP! ›