For years BHP was known as the Big Australian by small investors who placed it on a pedestal as the mining and steel manufacturing giant that provided wealth for all Aussies.
Ambition to become the world’s largest resource conglomerate became reality in June 2001 with the creation of BHP-Billiton, a structure that proved unwieldy to administer, and exposed it to opportunities in times of boom, but risked multiple cyclical downturns when demand flagged.
First steel manufacturing was divested. One Steel was created 23 October 2000 (now Arrium) and Bluescope Steel from BHP Steel on 23/07/2002.
Now on the 25th May 2015, BHP has made an in species distribution of ? second tier mining assets including Alumina, aluminium, coal, manganese, nickel, silver, lead and zine in the Southern Hemisphere, into South 32.
Ironically it has retained iron ore, and oil and gas assets, whose values have been savaged by unprecedented falls in the prices of iron ore, and crude oil, with no early resolution on the horizon. Arguably it may be South 32 rather than BHP whose share-price recovers first.

Large institutional holders of down-trending shares can’t afford to just sit on their positions. They must wait-out downturns by active trading, taking short positions when they can. South 32 is an example, falling since June of this year from a high of $2.45, to a low of just 95 cents on the 14/12/2015.

South32 at the November AGM warned shareholders that it expected that demand from its largest customer, China, would remain depressed for some time yet, due to excess supply.

Business Spectator has noted that 3 of 3 brokers have a Buy recommendation on the stock. 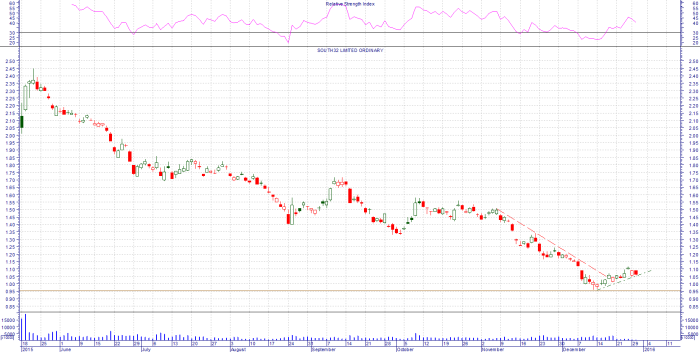 S32 has in the last two weeks bounced off support at 95 cents, and is now in an impulsive move higher which has broken the recent downwards trend-line.

Technical analysts will note however that the share-price is still in a primary down-trend, and will be reluctant to take long positions in the stock just yet.

Some Professional investors however may deem that at current levels the share-price is not likely to fall further, and that it is appropriate to start to accumulate stock as a counter-cyclical play.

Like Loading...
‹ Military Christmas, then and now
XJO – When is it better not to sell in a falling market? ›