GFC down-turn lingers on in Australia 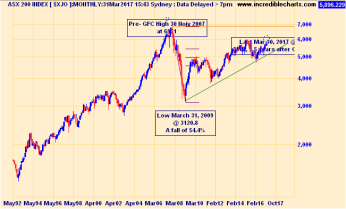 The saying that when the US market catches a cold, the Australian develops pneumonia, has certainly proved to be true for the effects of the Global Financial Market (GFC).

I have posted monthly charts for the US Dow Jones Industrial Average (DJI) and the S&P, ASX 200 Index (XJO) for comparison. The difference is astounding. It shows how much better off an Australia investor would have been to transfer their Aussie market assets to the US in 2009, when the down-turn was at its worst.

I’m not qualified to say why the two markets are so different, (about 60%) but I suspect that a significant factor has been the greater liquidity in the US from quantitative easing of the financial markets. I understand the UK pursued a similar policy.